Metal pipes made of carbon steel plates with corrugated pipe walls are used to replace reinforced concrete culverts and small bridges in highway and railway engineering after hot-dip galvanizing and other anti-corrosion treatments.

Spiral Corrugated Culvert is a high-strength steel pipe with a certain degree of flexibility. When the corrugated steel pipe is embedded as a culvert, under the combined action of dynamic and static loads, the pipe will theoretically be compressed and deformed, and the steel pipe will be deformed in two directions. The soil or other fillers on the side walls are squeezed on the side, but the soil on the side walls after compaction has a reaction force on the pipeline, restraining its deformation, and helping the pipeline to withstand vertical loads, and when the pipeline is under load, the pipe wall of the pipeline The surrounding force is evenly distributed, which is the pipe-soil effect.

Due to the pipe-soil effect, the pipe culvert improves the ability to adapt to the deformation of the foundation and foundation, and effectively solves the problem of culvert damage caused by uneven settlement of the foundation. Moreover, the corrugated steel pipe culvert has good stress characteristics due to the existence of corrugations. The stress and strain caused by the load in the axial and radial directions can be distributed to a greater extent, and the advantages of the steel structure can be better utilized. 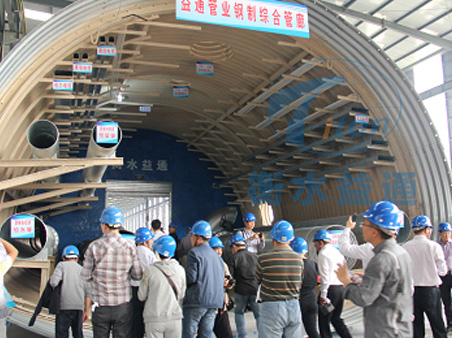 Corrugated steel pipes have been used in developed countries such as Europe and the United States for more than 100 years; in 1896, the United States took the lead in conducting a feasibility study of corrugated steel channels and culverts, and was first applied to highway culverts. In 1923, the American Association of Railway Engineers conducted a test of corrugated steel channel on the Illinois Central Railway. Since then, corrugated steel pipe culvert products have been widely used in highway projects in the United States and Canada, and corresponding technical standards, design and manufacturing, construction and installation manuals have been formulated. East Asian countries such as Japan and South Korea have formulated corresponding technical specifications for metal bellows bridges and culverts from the 1980s to the 1990s, and they have begun to be widely used; currently, the largest span used abroad is Canada’s 26m.

After the introduction of corrugated steel pipes into my country, anti-corrosion technology has been greatly improved, surpassing the United States. In the United States 20 years ago, the development of corrugated steel pipe technology was stagnated due to the basic saturation of highways and the substantial reduction in highway construction. At present, dual anti-corrosion technology has been developed in China, the first layer of hot-dip galvanizing, and the second layer of hot-melt press-coated modified corrosion-resistant and wear-resistant HDPE. This is the first time in the history of China and foreign countries that this product can achieve Life span of more than 100 years.

The fill height that culverts of different diameters can reach without adopting any auxiliary load reduction techniques.

After taking load reduction measures, the culvert can reach a higher filling height.

Previous: How to Select Culvert = What Culvert Should I Install?